Promote Your Page Too

.
When I fuss about something I've got a duty to acknowledge something done right.

I just got off the phone with a young lady at Financial Freedom -- Cindy -- who obviously knew her job and how things worked.  She explained the process and the HUD (Gov-mint) rules they have to follow very well.  She answered all my questions and was quite pleasant to talk to. She even gave me her direct number in case I have future questions.

.
The good news is I finally got the information I was asking for from FF.

The bad news is it included $3500.00 for "foreclosure expenses".  I immediately (within 30 minutes of receipt) faxed to the same person who sent the fax a series of questions about the supposed foreclosure. In my query I acknowledged receipt of the payoff fax.

This morning I get a fax from a Tia -- , claiming to be a "Loan Servicing Administrator" at Financial Freedom -- it's a form that totally ignores the history of my contact in this case and states she must have a "Signature authorization to release . . . ".  She got a worthwhile response:

First, you obviously did not read my inquiry or don't have the education to understand what I wrote. I ALREADY RECEIVED a payoff; my inquiry was to a component of that payoff.


Second, I am the guardian and conservator for (individual) I've sent the papers to Financial Freedom at least twice and am now receiving monthly statements. If you know how, I suggest you look. Thus, I've GOT the authority to ask.


I trust I've made myself abundantly clear this time and the information requested about the 'foreclosure fee' in the payoff will be forthcoming immediately.


If you still cannot assist, elevate this to someone with intelligence.

Isn't it sad that with the centralization of our economy the people handling our financial records don't know how to think?
.
Posted by -- ross at 1:22 PM No comments:

I'm handling a guardianship where my ward has real estate with a 'reverse mortgage' held by Financial Freedom.  As a rule I do not like reverse mortgages but recognize they can be a useful tool in certain limited circumstances.

Well over a month ago I called Financial Freedom, faxed the Court Order appointing me, and asked them to send me some information.  I haven't heard from them at all.  This is not unusual -- in my opinion  Financial Freedom is among the top ten worst real estate loan servicers out there. Whenever I mention their name to a colleague doing Real Estate, Elder Law, or Probate, I get a groan in return.

The other day I went to their website to see about calling in; they have a utility called "Search Financial Freedom".  I entered 'Intelligent Individual" -- the response was "Results: 0" 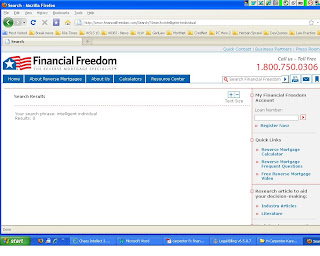 A block too far

.
My daughter Allyson is in a wheelchair.  She's been in one pretty much all her 21 + years.  I've worked to encourage her to do her own thing - be independent - and I'm very proud of her accomplishments and independence.

Allyson can't drive, nor can she 'ride the bus' if she wants to go somewhere. I can't take her everywhere either.  So she relies on an outfit called RADAR, an acronym for Roanoke Agencies Dial A Ride. RADAR is one of two handicap public transportation services in the area; the other is CORTRAN, for County of Roanoke Transportation.  RADAR serves the Cities of Roanoke and Salem; CORTRAN serves Roanoke County.

What happens if you want to cross the border?  Apparently you can't do it!

Allyson recently joined Fellowship Community Church (FCC).  She loves it there, and they are very supportive of her.  FCC provides transportation as part of its ministry on Sundays; other days there are members who might be able to help but the folks at that church have day jobs they need to go to. They've got a function this coming Wednesday night and since she wants to go, she called RADAR and booked the trip.  RADAR called back and canceled.

The Problem:  Fellowship Community Church is about two blocks over the line into the County from the City of Salem. So RADAR can't take her according to the rules.  Funny thing:  RADAR has taken Allyson to Fellowship several times in the past. And gee, it appears that they use the same vehicles as CORTRAN.

The RADAR/CORTRAN/etc. website gives absolutely NO rules of where you can and can't go. Call them and they say that Roanoke Valley Metro sets the rules.  Go to the Valley Metro Site and nowhere do you find the rule that you can't cross the city/county line. Unless you're going to Tanglewood Mall, which is in the county. But forget about going to the doctor's office a block away from Tanglewood. And I haven't even tried to navigate the County's website for more information.

SO, if you live in Salem or Roanoke City and need 'paratransit', don't try to go to Roanoke County or get a job in Roanoke County. And if you live and work in the County and use CORTRAN, don't move to the city or you'll lose your job.

Valley inter-government cooperation?  Not for 'paratransit'. Of course, I'm not surprised.  Our governments hate the poor.
.
Posted by -- ross at 3:21 PM No comments: