Promote Your Page Too

I've been shopping at Radio Shack stores for 40+ years -- I remember when they were a catalog only, then they started their retail operation.

Radio Shack helped get the personal computer revolution started 'back in the day'. My first several computers were from Radio Shack.

But what I liked best was being able to go in there to buy parts so I could make or fix electronic stuff. Unfortunately that's no more.

In the past week I've gone in twice to buy something I've gotten there before.  And it's no longer offered. Instead, there are cell phones, a few cb's, and 'pop' electronic stuff.  It seems Radio Shack is trying to compete with Best Buy.  Ain't gonna succeed.

What the mba grad who decided to do this didn't understand is that while, yes, parts are a low margin item, they bring people in. Once in, we see something we've 'just gotta have' and buy it.

Remember the Sears Catalog?  When they did away with it, Sears headed towards bankruptcy. The brilliant Sears mba who decided THAT didn't realize that we'd sit at home, look through the catalog, and THEN head to the retail store to buy whatever, plus something on display we 'just hadta have'.  No catalog, no visit to the retail store, reduced sales.

Looks like history repeating itself.  If I owned Radio Shack's stock I'd be selling it.
.
Posted by -- ross at 6:14 PM 1 comment:

.
Last Saturday I happened to stop by my office to pick up something.  As I was leaving, there was a car parked in my lot while the driver went to the store next door. Susan and I saw the passenger door open and the ash tray dumped into my lot. 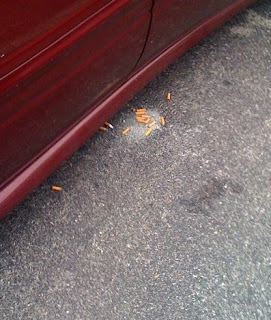 Littering is one of my buttons you don't wanna push.

I pulled in and blocked the car, and in a remarkably calm (for me) manner asked the passenger if he'd kindly pick up the butts.  He ignored me, rolled up the window and locked the door.

I called 911 (police station is in next block).  As one responding officer said, as I remarked on three cars showing up, 'it's been a slow day and we were about to fall asleep'.

Yes, the butts got cleaned up.  No, I didn't press charges because of the inconvenience to the legal system if I did -- they'd have to bring in an out of town judge to hear the case and litterbugs just aren't worth that.

.
I've got two loans at Wachovia -- now becoming Wells Fargo due to Wachovia Management stupidity. Essentially they're a first mortgage and a secured equity line of credit. Yeah, I got the loans even though I didn't really like Walk-ova-ya, but hey - they offered me a good deal and I keep good enough records to challenge them when they screw up.

So of course they've screwed up -- but it kind of favors me.  I have a "Mortgage Equity Loan" (really a first mortgage but without the usual pile of crap paperwork that comes with one) and my loan contract calls for regular monthly payments of "X".  The WF Borg has now assimilated my loan (Star Trek - Next Generation fans understand this term) but tells me my payments are only "Y", about $200 less than X. Obviously the idiot doing the 'conversion' from Wachovia to WF (could that stand for "We're Foolish"?) didn't input it correctly.

It favors me as to cash flow.  It doesn't favor me as I'll pay more interest over the years if I drop my payment. And what happens if they catch their mistake and demand back payments?

And get this:  on the monthly statement there are SIX DIFFERENT ADDRESSES for WF:
My education is at the Doctorate level (yep, law degrees are "Juris Doctor").  Imagine someone who got an 8th grade education at a half-rate school district trying to figure our where to send something.

Don't forget, We're Foolish (I like that nickname) is number 8 from the bottom on customer non-service - see my earlier blog It's Not Just Me

One of these days I'll have to get insulting about the big banks.